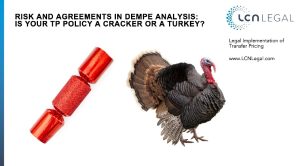 According to conventional wisdom in transfer pricing, the OECD TP Guidelines prescribe that the economic ownership of an intangible asset depends on which entity or entities perform the so-called 'DEMPE functions’ in relation to it. Those are Development, Enhancement, Maintenance, Protection and Exploitation.

Actually, however, that statement is only partially correct. Indeed, it is potentially misleading.

First, the OECD guidelines do not refer to ‘economic ownership’ at all. They refer to compensating entities for their respective contributions in relation to intangibles.

Second, DEMPE analysis does not just relate to the performance of functions (or even the ‘control’ of functions). It also looks at the assets used and the risks assumed by the respective entities.

See for example, para 6.48 of the OECD guidelines:

“The arm’s length principle and the principles of Chapters I-III require that all members of the group receive appropriate compensation for any functions they perform, assets they use, and risks they assume in connection with the development, enhancement, maintenance, protection, and exploitation of intangibles.”

Clearly, assumption of risk is a key element. And, because risk only has meaning where there is uncertainty, it only relates to the future. Which is why the OECD TP Guidelines state the following:

“The terms of the compensation that must be paid to members of the MNE group … is generally determined on an ex ante basis. That is, it is determined at the time transactions are entered into and before risks associated with the intangible play out.” (Para 6.45.)

This therefore requires that intercompany transactions involving intangibles are priced in advance, not after the event. And that the decisions and intentions of associated entities regarding the allocation of rights in intangibles are also documented in advance. The guidelines say so clearly:

“Documentation of such decisions and intentions, including written agreements, should generally be in place at or before the time that associated enterprises enter into transactions leading to the development, enhancement, maintenance, protection, or exploitation of intangibles.” (Para 6.36.)

If you fail to do these things, you risk producing a TP policy that is an absolute turkey – one that only tax authorities will enjoy getting stuck into.