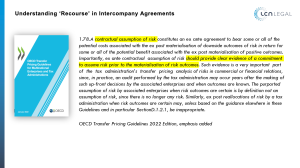 The concept of ‘recourse’ is key to understanding risk allocation in intercompany agreements.

It’s also key to implementing transfer pricing policies in a way which is consistent with the approach set out in the OECD TP Guidelines: the fundamental idea of delineating transactions between associated entities, and then allowing the risk allocation inherent in that delineation to ‘play out’ or 'materialise'.

‘Recourse’ refers to the ability of one party to make a contractual claim against another. It encompasses both the subject matter of the claim and its quantum.

One way of looking at contractual recourse is to ask three questions:

1. In what circumstances would a claim arise? For example, a breach of a duty to deliver goods corresponding to an agreed standard. Or a contractual indemnity which applies if one party suffers a third party product liability claim.

2. How would any claim be calculated? For example, a potential claim may include loss of profits. Or a dollar-for-dollar payment to ‘make whole’ the party being indemnified.

3. What exclusions or limitations would apply to the claim? For example, there may be a contractual cap on the total amount of claims in a period.

The archetypal example of this approach is insurance policies - underwriters are masters of defining and assessing risk. And of course the policy terms and inextricably linked to the pricing of premiums.

As with any other aspect of intercompany agreements, the objective here generally not to replicate the form of contractual arrangements which exist between unconnected third parties.

The objective is to implement the relevant transaction in legal reality in a way which:

* approximates an arm’s length result for the parties;

* aligns with operational reality; and

* also aligns with the financial capacity of the relevant parties to bear risk.