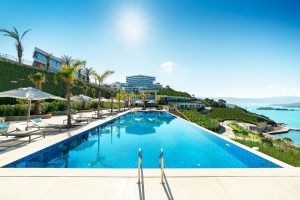 A ‘swimming pool’ clause may be appropriate in a Transfer Pricing context whenever there is an intercompany supply of services, and the activities carried out by the service provider may benefit more than one entity.

A classic example would be central support services such as accounting, HR or IT support, which benefits the service provider as well as multiple group entities, typically charged on a cost plus basis. A swimming pool clause simply sets out the basis on which that ‘pooled’ cost is allocated between the various beneficiaries. It’s similar to commercial arrangements which can exist between unconnected parties. Such as those in a residential development, where a central cost (such as a swimming pool available for use by all the residents) is allocated between leaseholders – maybe pro rata to the square footage of each individual apartment.

It’s also known as an ‘allocation key’, and the relevant measures may be things like revenue or headcount. It may just be a single line in an agreement.

You may think ‘Why bother? It doesn’t sound earth-shattering to me.’ But the thing is: you can’t automate (or even delegate) the production of financial information for TP unless you’re clear on the parameters. Otherwise there’s a high risk of ‘rubbish in, rubbish out’.

How is it that large corporates like McDonald’s and Coca-Cola made such a mess of their TP arrangements, even though billions of dollars were at stake? Presumably because they took a casual approach to their TP and the implementation of their TP. And as the late, great Jim Rohn used to say, ‘casual leads to casualties’.

So if the question of cost allocation is relevant and material, let’s take the trouble to get the relevant line in the relevant intercompany agreements right.