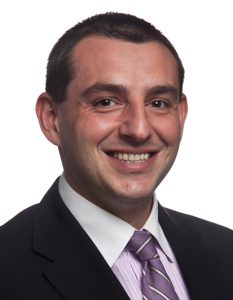 Adnan Begic is Head of Transfer Pricing for Michelin Asia-Pacific. A highly experienced TP expert, he has also worked in Big Four firms in New Zealand and Singapore.

How did you first get into transfer pricing?

To be honest, it was completely by chance. My university background is typical: MBA, focusing on corporate finance, investment banking, economics and so on, rather than international tax or transfer pricing. When I studied in Frankfurt, Germany, there was a requirement that in one semester you had to do an internship in a relevant company. So in professional services, you’re looking at a big bank or the Big Four firms.

I ended up in a transfer pricing team at Ernst & Young in Auckland, New Zealand (which is about the furthest place that you could go to from Frankfurt). To start in transfer pricing, you don't need to have necessarily a tax law or accounting background. They take economists or people with a corporate finance background.

I really found it interesting because it’s a mixture of different disciplines coming together. It's not just number-crunching. It's storytelling: understanding in depth what values are created by the company in the different parts of the value chain, understanding the operating model of large multinational company and the economics of it. So that's how I started in transfer pricing, and I still enjoy doing it every day.

And another reason why I stayed in transfer pricing and didn’t go into corporate finance is that in the early stage of my transfer pricing career the global financial crisis was just brewing up. The corporate finance jobs weren’t there, and investment banks were laying off people, and that was just not the area to go into. So I thought, “Maybe this is not the worst place to be at the moment.” I spent my time there during the global financial crisis, and by the time the world economy started to recover, I wasn’t even thinking of doing anything else.

Who has been the most influential role model or mentor in your business career so far?

It's a gentleman called Matthew Andrew. He is currently with the OECD, leading the work on Pillar 1. He was a partner at Ernst and Young when I did my internship, and he was the one who offered me a full time job after my graduation.

Matt and I worked on a lot of projects together in New Zealand and in Singapore. He was my mentor, and I learned a lot from him in the early days of my transfer pricing career.

How has the world of transfer pricing changed during your career?

It has changed in many ways. First of all, the compliance: the disclosure requirement has significantly increased. The expectation of the revenue authorities – what needs to be captured in your transfer pricing document just for compliance purposes – has gone through the roof. The level of transparency is much larger than just 15 years ago, and most multinational companies consider transfer pricing risk to be one of the key risks. We have all witnessed in the last few years that transfer pricing can also be used as a political tool, and it can cause significant reputational damage to companies.

Another element that has changed significantly is that the expertise of revenue authorities in the field of transfer pricing has increased significantly. Tax authorities are now also sharing information with one another, and it is important for multinational corporations to have sound and consistent TP policies in place.

Take Asia, for example: 10 years ago, half of the Asian countries didn't even have local transfer pricing legislation. Whereas today there is almost not a single Asian country without TP legislation, and the expectation is that taxpayers comply at the highest standards.

Do you think that most multinational groups have caught up to that new reality?

It depends on the size of the company: the bigger the company, the more focus it will get from the revenue authorities. With the increased transfer pricing complexity, disclosure, compliance requirements, many companies have invested in transfer pricing resources and have a dedicated TP person in-house. Not necessarily to draft the TP documentation, but to manage the increased complexity and to be the link between the legal, finance, tax and commercial departments, to ensure alignment and that transfer pricing policies are implemented and followed consistently.

Companies that are still below 1 billion Euro revenue may be lagging behind, and relying much more on advisors, and will not necessarily have dedicated in-house transfer pricing resources. But if you look into most multibillion dollar multinational companies (regardless of the industry) you will certainly find at least one transfer pricing person, if not an entire TP team, to manage these new requirements.

Another area where companies are catching up is operational transfer pricing. It is a concept that allows companies to monitor and proactively respond to the changing transfer pricing landscape, in order to solve problems and enhance process management through technology.

Looking to the future, what changes and challenges do you think that the transfer pricing world will have to address in the next few years?

The OECD is steaming ahead with the Pillar 1 and Pillar 2 implementation. A few years ago, we had the BEPS program, which led to the transparency and disclosure requirements that we see today.

Now, the OECD is working on the next level of international tax reform, which is known under the name Pillar 1 and Pillar 2. You’ve probably heard about Pillar 2 in the news recently: the global minimum tax of 15% percent. That is going to impact multinational companies, of course, and also governments that have incentive programs that bring the corporate income tax in their country below 15%.

Pillar 1 is impacting even more on multinational companies, because it may result in redirecting residual profits to the countries where most of their consumers or users are.

OECD’s Pillar 1 and 2 are going to be a big change in the years to come.

What do you think that multinationals will have to do in response?

It will certainly add another layer of complexity to the compliance process, and some companies may end up paying more taxes.

However, the upcoming reform under OECD’s Pillar 1 and Pillar 2 will not only impact the multinational companies, but also revenue authorities, who are participating in the inclusive framework, Many will need to review and potentially change their tax incentive programs.

Imagine that there was a new Global Tax Authority, and you were appointed to lead it… how would you change the global tax regime that multinationals operate in?

There are two elements.

One is the dispute resolution program. The majority of companies are not trying to avoid paying tax. They’re trying to pay the right tax amount of tax in the right countries, and they are doing their best to comply with domestic regulations in the countries where they operate. But even if a multinational company is doing everything in its power to comply, it will face tax and transfer pricing audits and disputes at some point.

Resolving these disputes takes too long. It is very draining on companies’ resources, and the aggressiveness of some tax authorities when they go after transfer pricing audits seems a bit disproportionate. There should be a way to resolve this much faster.

Another change is very specific to transfer pricing. It would be helpful for multinational companies to have more certainty through ‘safe-harbour’ regimes. If there would be a global tax authority that I would lead, I would try to obtain international consensus on a much wider category of transaction. This would reduce the compliance burden, provide more certainty, and reduce audits for the transactions covered by the safe-harbour regime.

What career achievement are you most proud of?

The transition from Big Four to an in-house role is always a big change, from being the adviser to getting into a company and seeing the bigger picture. Finding out what the company’s typical pain points are, and then addressing them. It is fair to say that often the operational work of the in-house transfer pricing or tax team only begins, where the work of the adviser finishes. So making the transition smoothly is a big achievement.

Another achievement that I am very proud of is my ongoing active involvement in the Tax Executives Institute. I had the honour to serve TEI as a board member, Singapore VP, and as the President of the TEI Asia Chapter.

What would be your ideal job if you weren’t in transfer pricing?

Architect. I’m fascinated by architecture, urban developments, well-functioning cities. I love it when I see a really clever solution to an urbanisation problem.

Which cities do you think are particularly well designed?

Singapore. It’s the probably the most thought-through city from the point of view of good urban development and clever solutions. The mobility, the infrastructure, the movement of people and goods. You have a small tropical island with 5.5 million people and you never feel that it's congested. Of course, you have rush hour in every city, but generally the flow of people and goods is very efficient. It also feels like that the entire city is built in big park or botanical garden. For me, Singapore is the benchmark.

Why do you think that is? How did the Singapore planners manage to succeed where others failed?

I believe it's because there is clear vision of a city state that that Singapore wants to achieve, and there is a clear execution plan on how to realise the vision.

And what do you do to relax?

With four children, there's not much time to relax. Joking aside, I do enjoy quality time with family. I enjoy spending time with both my older kids and the younger kids. As we have two teenagers and two young ones, there are different types of activities. From building Lego and playing some board games, to going for a nice hike in nature. Basically, everything that involves quality time with family. We have just moved to New Zealand after 11 years in Singapore, and I am looking forward to discovering the outdoor adventures this country has to offer.

How would you describe yourself in three words?

I prefer to approach life with a pinch of humour, and don't take the daily challenges too seriously. It is important to keep things in perspective and stress less.

So maybe the three words are “sense of perspective”.

What is your favourite film?

A Few Good Men. It is an old-fashioned courtroom drama with a contemporary edge. I'm not a lawyer, but I like that strategic approach to resolving the case. Not to mention the powerful performances delivered by Jack Nicholson, Tom Cruise and Demi Moore during the key scenes.

Which actor should play you in the film of your life?

Who would be your ideal guests at a dinner party?

Michael Jordan. He’s the person I would most like to meet in person and have a chat with. I always admired his drive, determination, and not accepting anything but excellence. Very closely behind Michael Jordan would be President Obama. I just liked his articulation and the way he spoke when he was President, when he gave the big speeches and brought people together through words. There’s a really good documentary called ‘Writer in Chief’. It shows how much time he spent writing his speeches and thinking about the tonality. I really admire that about Barack Obama.

What advice would you give your younger self, when you when you were just starting out?

“Don't stress too much. Everything will be fine.” It’s difficult when we are young and at the start of our career, and there is a lot of pressure in the Big Four consulting firms. When you’re more mature in your career you realise that you can achieve much better results if you take a step back, put everything in perspective, and approach the topic with less stress.