On 19 July 2022, the Upper Tribunal in the UK released a judgment in the case of HMRC v BlackRock Holdco 5 LLC. This overturned the previous decision of the First-tier Tribunal (FTT) and found in favour of HMRC: it disallowed an interest deduction on a $4 billion intercompany loan. How concerned should the TP community be?

Looked at one way, the decision appears to turn on its head what we previously believed to be best practice about documenting intercompany loans, and in particular the treatment of covenants from parties other than the lender and the borrower.

And yet the outcome of the case should not be a huge surprise. This was a highly artificial structure which was put in place in the knowledge that it was aggressive in its tax objectives. An internal BlackRock email that was quoted in the judgment says as much: “HMRC will likely view the transaction as being aggressive, which may lead them to: (1) revisit our low risk rating; (2) seek other issues to challenge us on; (3) seek every means possible to challenge the structure….”

This article looks in detail at the facts of the case and the reasoning behind the judgment on the key transfer pricing issue, and considers what multinationals and their TP advisers should do differently as a result.

In the words of the Upper Tribunal judgment:

“This appeal concerns the structure used by the BlackRock group of companies (“the BlackRock Group”) to acquire the North American investment management business of Barclays Global Investors (“BGI US”) from Barclays Bank plc in December 2009. The ultimate issue in this appeal is whether the Respondent, BlackRock Holdco 5, LLC (“LLC5”), which was created and used as part of the acquisition structure, was entitled to non-trading loan relationship debits in respect of the interest and other expenses payable on $4 billion worth of loan notes. The loan notes (“the Loans”) were issued in return for the loan LLC5 received from its parent, BlackRock Holdco 4, LLC (“LLC4”). As described in greater detail below, the Loans were part of the intra-group financing for the purchase by the BlackRock Group of BGI US.”

The group structure is set out in this diagram. 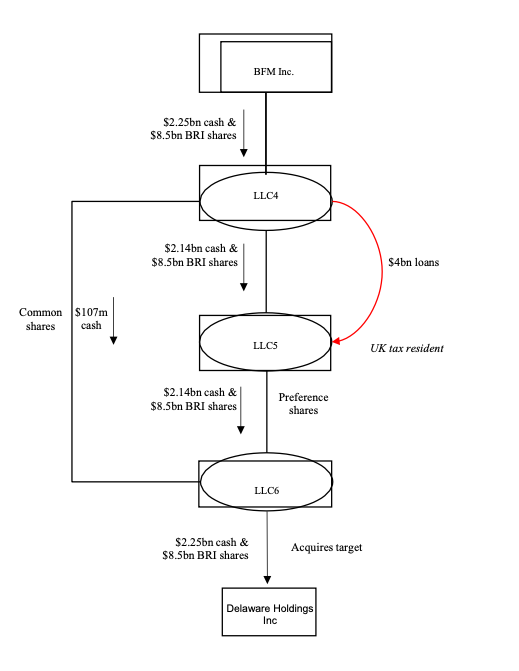 The HMRC challenge and the First-tier Tribunal decision

HMRC made amendments to the tax returns of LLC5 (the borrower of the $4 billion loan) for accounting periods ending 30 November 2010 to 31 December 2015 inclusive, disallowing the loan relationship debits in respect of interest payable on the Loans.

The First-tier Tribunal (FTT) decided in favour of BlackRock: it found that an independent lender acting at arm’s length would have made loans to LLC5 in the same amount and on the same terms as to interest as were actually made by LLC4 (the “Transfer Pricing Issue”). The FTT further found that the Loans had both a commercial purpose and a tax advantage purpose, but that it would be just and reasonable to apportion all the debits to the commercial purpose and so they were fully deductible by LLC5 (the “Unallowable Purpose Issue”).

The Upper Tribunal, however, found in favour of HMRC on both the Transfer Pricing Issue and the Unallowable Purpose Issue.

It is worth noting that the experts for the respective parties both agreed that an independent lender would have entered into an arrangement subject to it being able to obtain the necessary covenants. So this was not a typical transfer pricing dispute relating to the pricing of loans. It was a case of ‘all or nothing'.

A central question in the Transfer Pricing Issue concerned covenants to support the $4 billion loan made by LLC4 to LLC5. The parties agreed that an independent arm’s length lender would have required covenants from various third parties including BGI (the target) and LLC6 (the bidco), in addition to covenants from LLC5 as borrower.

The experts for HMRC and BlackRock also agreed that the main concern of an independent lender of $4 billion to a company like LLC5 would be the risks around the control over the dividend flow to it and so its ability to repay the loan. The First-tier Tribunal and the Upper Tribunal considered the following hypothetical covenants which the lender LLC4 may have required:

“(1) covenants by BGI [the target] and LLC6 [the bidco] restricting the amount of debt that could be raised by them (to prevent profits to be diverted in repaying such debt);

(2) negative pledges by BGI [the target], LLC5 [the borrower] and LLC6 [the bidco] restricting them from granting security to other lenders;

(3) a covenant by LLC4 [in its capacity of holder of some of the shares of the bidco] that it would not interfere with the declaration of dividends by LLC6 [the bidco] and BGI [the target];

(4) covenants by BGI [the target] and LLC6 [the bidco] that, without prejudice to their own discretion regarding the declaration of dividends, they would not frustrate the expected dividend flows (e.g. by making loans to LLC4); and

A key question was whether covenants of this nature could be imputed into the loan arrangement, for the purposes of providing a comparable transaction for transfer pricing purposes. The Upper Tribunal judgment considered the 1995 version of the OECD Transfer Pricing Guidelines (the relevant version for the case in hand), and quoted the following provisions (amongst others):

“Application of the arm’s length principle is generally based on a comparison of the conditions in a controlled transaction with the conditions in transactions between independent enterprises. In order for such comparisons to be useful, the economically relevant characteristics of the situations being compared must be sufficiently comparable. To be comparable means that none of the differences (if any) between the situations being compared could materially affect the condition being examined in the methodology (e.g. price or margin), or that reasonably accurate adjustments can be made to eliminate the effect of any such differences.”

The relevant UK legislation includes the Taxation (International and Other Provisions) Act 2010 (TIOPA). Section 147(1) of that Act provides as follows:

147 Tax calculations to be based on arm's length, not actual, provision

(a) provision (“the actual provision”) has been made or imposed as between any two persons (“the affected persons”) by means of a transaction or series of transactions,

(b) the participation condition is met (see section 148),

(c) the actual provision is not within subsection (7) (oil transactions), and

(d) the actual provision differs from the provision (“the arm's length provision”) which would have been made as between independent enterprises.

(Underlining as added in the Upper Tribunal’s judgment.)

Section 164 of TIOPA states that the relevant provisions of that Act are to be read in such manner as best secures consistency with the OECD Transfer Pricing Guidelines.

However, Section 147(1)(a) of TIOPA refers only to an “actual provision” as made between “two persons”. The Upper Tribunal cited the 2009 UK transfer pricing case of DSG Retail Ltd v HMRC, in which the Special Commissioners said:

On that basis, the Upper Tribunal concluded that:

“ … the FTT erred in law in permitting new third-party covenants absent from the actual transaction to be taken into account when considering whether an independent lender would make a $4 billion loan to LLC5. The FTT decided that such an independent lender would not have made a $4 billion loan to LLC5 without such covenants being in place and that important finding should itself have determined that there was no comparable arm’s length transaction. Having decided that, the FTT would have been bound to conclude that no “provision would have been made as between independent enterprises” (s.151(2)).”

This was therefore very much a binary decision on the Transfer Pricing Issue, with the reasoning running as follows:

From a commercial legal perspective, the interpretation of “provision … between two persons” in Section 147(1)(a) of TIOPA, as reflected in DSG Retail Ltd v HMRC and the Upper Tribunal judgment in BlackRock, seems very narrow indeed. In typical finance agreements between lenders and borrower, conditions precedent for loan advances may include a requirement that the borrower procures security, covenants or insurance policies from third parties, for the benefit of the lender. Most people would surely regard this as part of the “terms” or “provisions” of the loan agreement between borrower and lender. As a non-tax lawyer, I leave it to others to comment on whether or not the BlackRock case (and indeed DSG Retail v HMRC) is correctly decided on this point.

I do, however, question whether this interpretation would be regarded as consistent with the spirit of the 2022 version of the OECD’s Transfer Pricing Guidelines, if they had applied. Chapter X of those Guidelines (Transfer pricing aspects of financial transactions) provide the following commentary on the question of covenants:

“10.86 There may be less information asymmetry between entities (that is, better visibility) in the intra-group context than in situations involving unrelated parties. Intra-group lenders may choose not to have covenants on loans to associated enterprises, partly because they are less likely to suffer information asymmetry and because it is less likely that one part of an MNE group would seek to take the same kind of action as an independent lender in the event of a covenant breach, nor would it usually seek to impose the same kind of restrictions. Where there is an absence of covenants in any written agreement between the parties, it will be appropriate to consider under Chapter I guidance whether there is, in practice, the equivalent of a maintenance covenant between the parties and the consequential impact upon the pricing of the loan.”

Implications for the documentation of intercompany loans

A cautious approach in response to the decision in BlackRock might involve putting in place full ‘security packages’ for intercompany loans. The Upper Tribunal itself suggested that the Transfer Pricing Issue would have been resolved in favour of BlackRock, if the relevant covenants from BGI [the target] and LLC6 [the bidco] and others had been put in place as part of the legal documentation of the intercompany loans:

“We understand that the effect of this is, as Mr Prosser QC argued [for BlackRock], that LLC5 would not have been challenged if it had gone through the rather artificial exercise in the actual transaction of having covenants in place with LLC 4 and LLC 6 and BGI and so on as set out at [90] of the Decision. The BlackRock Group would not have needed to have such covenants in place in the actual transaction because these were intragroup companies, but if they went through that artificial process, then HMRC would have had to concede it would be possible to look at covenants provided by third-parties when considering the arm’s length transaction. This would therefore be open to abuse by a group determined to uphold the transaction for transfer pricing purposes.”

(As an aside, it seems rather perverse to describe such covenants as artificial, when elsewhere in the judgment the same covenants are described as “materially altering the economically relevant characteristics of the transaction.” - see para 58. But perhaps the Upper Tribunal’s view was coloured by BlackRock’s “aggressive” approach to managing its tax affairs.)

Previously, our view at LCN Legal was to take a pragmatic approach to covenants and security in the legal documentation of intercompany loans. This usually meant avoiding financial covenants unless the group concerned was able and willing to monitor them in real time. It also usually meant avoiding the granting of actual security (such as charges over assets), mostly due to the cost and the administration involved, let alone the potential impact on third party financing arrangements. This latest judgment of the Upper Tribunal means that we now need to reconsider this.

However, from one perspective the judgment can be seen merely as a reminder to have regard to the economic fundamentals, and the legal substance required, when designing structures involving intercompany debt. This includes considering the following factors:

In this respect, at least, nothing has changed.