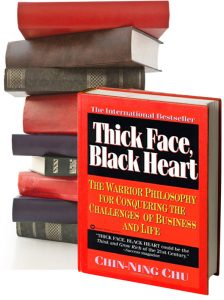 ‘Thick Face, Black Heart’ (subtitled ‘The Warrior Philosophy for Conquering the Challenges of Business and Life’) is more than just another self-help or business book. It is entertaining, enlightening and darkly fascinating. It combines Eastern philosophy with stories from ancient China, many of which make Game of Thrones look anaemic.

The author, Ms Chu, was born in Tianjin, China in 1946. She grew up in Taiwan and emigrated to the USA in 1969. She became a successful business consultant and business management writer, and died in 2009.

Chu’s book is based on a philosophical treatise called “Thick Black Theory” which was written by Li Zong Wu and was first intended to be published as a series of essays in The Chengdu Daily in 1911. In fact, the adverse reaction to the first instalment was apparently so intense that the rest of the series was cancelled.  “Thick Black Theory” describes the ways used to obtain and hold on to political power: “thick face” (shamelessness), and “black heart” (ruthlessness). The detail is breathtaking in its nakedness – such as ‘six ways to obtain an official position’, which are summarized as follows:

Chin-Ning Chu has taken the concepts of ‘thick face’ (which she describes as a shield) and ‘black heart’ (which becomes a spear), and used them as the core of a collection of principles for personal and business success, illustrated by stories of historical figures such as Abraham Lincoln and emperors in ancient China, as well as stories from the author’s own business life.

According to Ms Chu, we attain success in life by cultivating our warrior spirit and dedicating ourselves to expressing our own unique nature and in-built killer instincts. She challenges accepted wisdom: “Many of us were taught that when someone slaps you, you should turn the other cheek. This is not always the best course of action. There is a time to submit to being slapped, and there is a time to hit back twice so you will not be slapped again. … If you turn the other cheek because you are afraid to hit back, it does not mean you are morally superior. It simply means you are a coward.”

Many of the principles in the book are essentially amoral, even criminal – and sometimes horrifyingly so. However, she also adds another key element: Dharma, meaning ‘duty’ or ‘right action’. According to Chu, all beings have their own Dharma and all situations and circumstances have a specific Dharma. Dharma is not determined by the mind, but is already there — inbuilt — as part of the way the universe works. The choice is simply whether we adhere to it or not. Chu’s prescription is to recognize your duty, and to fulfil it with dedication and duty. For example, an employee’s Dharma is simple: to support the employer wholeheartedly.

Thick Face, Black Heart is a fascinating read on at least two levels – one as an insight into Chinese culture, and another as a practical tool for guarding our values and achieving a peaceful state of mind. Highly recommended.