An introduction to limited partnership funds: who does what?

This introduction is for people who are considering setting up a UK fund using the traditional structure of an English limited partnership. This is only one of a range of legal structures which can be used, but it is a tried and tested model.

The structure is summarized in the diagram below. This particular one is for a real estate fund, but very similar arrangements can be used for private equity or venture capital funds or investments into other projects. 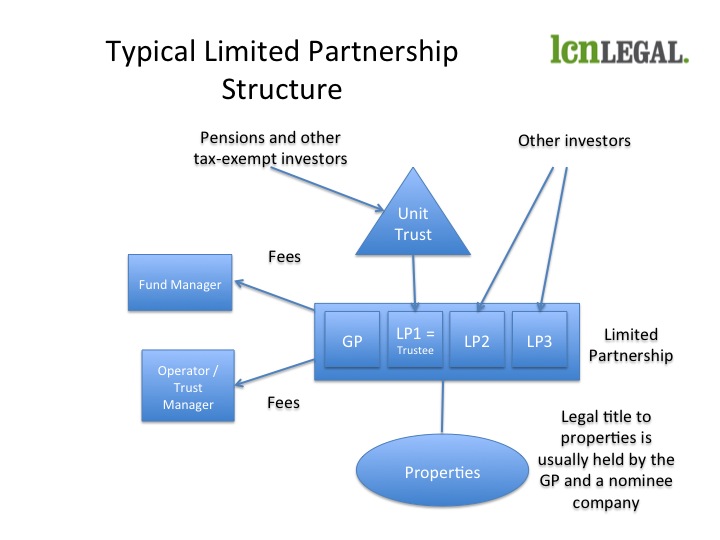 The Fund Manager (or asset manager) is the entity which sources investments, negotiates investments, manages the assets and arranges disposals. This is the ongoing business which engages staff and can provide its services to a number of funds or clients. It is usually structured as a limited company or an LLP. The Fund Manager receives a fee from the Limited Partnership – this can include annual fees based on the assets or net assets of the fund, fees for specific transactions, and fees based on the performance of the fund. The fund will be an “Alternative Investment Fund” for the purposes of the Alternative Investment Fund Managers Directive, and so the manager will need to be registered with the UK Financial Conduct Authority.

The Limited Partnership is the main vehicle for the fund. Strictly speaking, it is not a separate legal entity, but is a partnership between the “General Partner” and the “Limited Partners”.

The Operator is required because the Limited Partnership constitutes as ‘collective investment scheme’ for the purposes of UK financial services legislation. The establishment, operation and winding up of a collective investment scheme are regulated activities, and the operator must therefore be authorised by the Financial Conduct Authority (FCA). Its functions include dealing with applications to invest in the fund, making sure that proposed investments by the fund comply with the fund’s constitutional documents, and dealing with distributions to investors. If the Fund Manager has the relevant FCA permissions, then the Asset Manager may act as Operator.

A Depositary (not shown in the diagram) is required unless the fund manager qualifies as “small” for the purposes of the Alternative Investment Fund Managers Directive, which is the case if the manager’s total asset under management do not exceed one of the following limits: €500 million, provided the AIFs are unleveraged and have no redemption rights during the first five years; or €100 million (including assets acquired through the use of leverage). The depositary must be independent and must hold the relevant FCA permissions. Its functions include holding any financial instruments belonging to the fund in custody, verifying the fund’s ownership of all other assets and ensuring that the value of the units of the fund are calculated in accordance with the applicable rules.