This article is taken from the second postcard in our series of cards on group reorganisations, and looks at the price at which assets can be transferred intra-group.

Links to the other postcards in the series can be found at the end of this article. 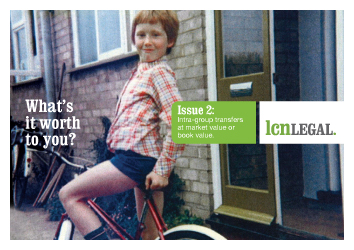 This legal issue arises on an ‘upwards’ or ‘sideways’ transfer. That is, when a UK company transfers an asset to a direct or indirect parent company or ultimate shareholder, or to another entity beneficially owned by its ultimate shareholder. (It does not arise on a transfer to the company’s own subsidiary, because the overall economic impact on the transferring company should be neutral.)

An upwards or sideways transfer at an undervalue may constitute an unlawful deemed distribution, with the result that:
• the transaction is void (and cannot be ratified, even by shareholders)
• the transferee is likely to hold the asset on trust for the transferor, meaning that the beneficial ownership stays with the transferor
• the directors of the transferring company who approved the transfer are potentially personally liable.

If the transferor has distributable reserves which are greater than zero, and it can satisfy creditors, then the asset can generally be transferred at book value, even though the market value of the asset may be higher. If not, then any asset must generally be transferred at market value, or else an amount equal to the book value of the asset, plus the amount of the deficit of distributable reserves, plus £1.

In some cases, the solvency statement procedure may be used to reduce the relevant company’s capital, create reserves, and thereby allow assets to be transferred at book value rather than market value.

Read the other postcards in this series:

Issue 1: Does the plan work for everyone?

Issue 3: How should we balance risk against cost?

Issue 4: Can we release our assets?

Issue 5: Are people getting something for nothing?

This simple form will help you kick-start your reorganisation project by capturing the planning essentials.