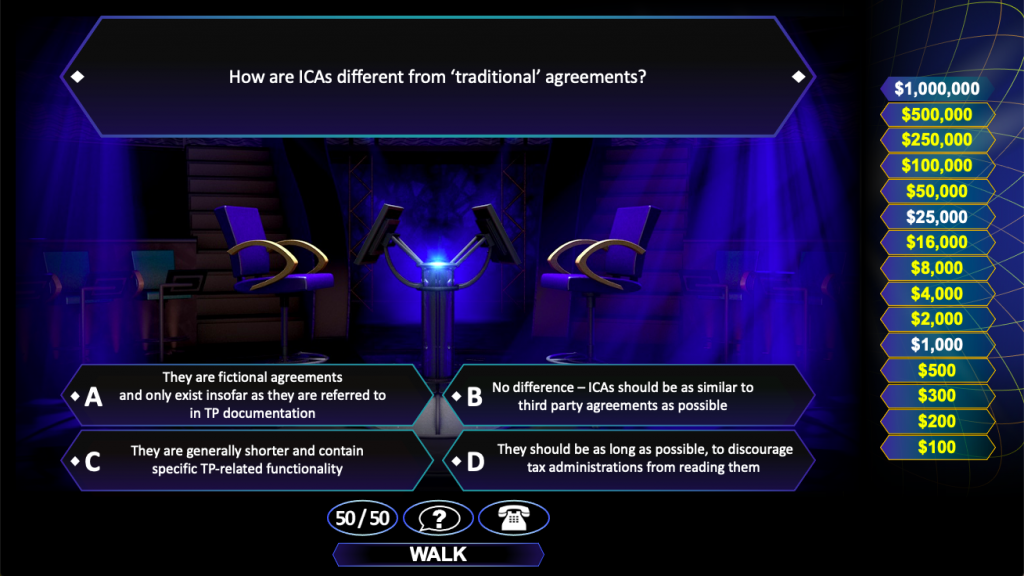 One of the most interesting audience responses we got from TP Minds Americas last month was in relation to the question ‘How are intercompany agreements different from ‘traditional’ agreements?’

The overwhelming majority of respondents chose option B: ‘No difference – ICAs should be as similar to third party agreements as possible.’

This misconception may account for the ridiculously long intercompany agreements we often come across (e.g. 60 pages for an intra group distribution agreement). One of the problems this causes is that, understandably, no-one reads the agreements until it’s too late.

The tax team just reads the pricing clause, and ignores the rest. The legal team thinks it has done a great job by providing a ‘market standard’ distribution agreement, but in fact the risk allocation and IP ownership provisions directly contradict the stated TP policies.

The result is often that such agreements are a liability, rather than an asset, when it comes to responding to a tax audit. Another, less visible, result of this misconception is that many tax and TP teams regard intercompany agreements as harder to implement and maintain than they actually are. So the job doesn’t get done at all.

It’s a bit like teaching your children to brush their teeth. Yes, you could get a PhD in dentistry. And you could instigate a year-long research program on the best possible toothbrushes and toothpaste on the market. But if you implement the basics – a habit of flossing and brushing all your teeth twice a day, you’re probably 98% there.

Here’s a slide which sets out our view of the 8 key ways that ICAs are typically different from traditional agreements.

And yes, there are exceptions: such as intra group services provided to regulated entities, which may be regarded as 'outsourcing' arrangements from the perspective of the service recipient. Or situations where an internal CUP is being used, and intercompany transactions can be documented (and managed) on terms identical to those used with third parties.

But those situations are most certainly the exception, rather than the rule.